During the Open competition, I completely exceded my expectations by finishing in the top ten places. I had gone into the competition with the hope of making it to semi finals, so nearly making finals was a complete shock. 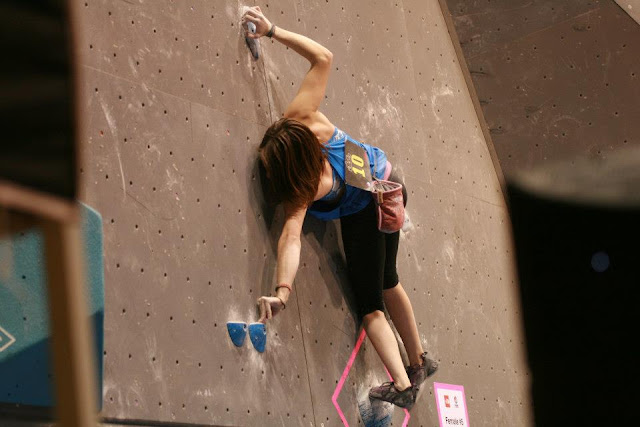 My fifth qualifier climb
Photo credit: Father
But, watching finals completely inspired me to train even harder, and hopefully be up there with the other top women athletes next year.

After Open Nationals, many of the youth competitors stayed the week in boulder, waiting to go back to Colorado Springs for Youth Nationals the following weekend. We had a super fun week, climbing at all the different gyms and chilling on our rest days.


On Thursday morning my mom, dad, Josh Levin, Melissa Godowski, and I all packed into our rented Subaru and headed to Colorado Springs. On the way we stopped at Garden of the Gods, which was absolutly beautiful. 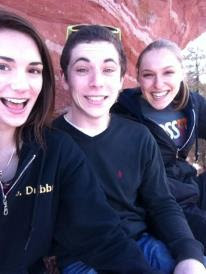 Me, Josh, and Melissa sitting on the balancing rock! 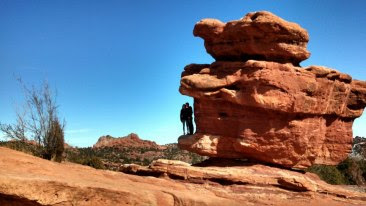 Photo credit: Melissa Godowski
When we finally got to the hotel, I checked in and then kept seeing people in the lobby! So many people stayed at the Antlers.
﻿
The next day everyone had qualifiers, but the Youth A's and Juniors had to wait till past 4pm to check into iso. So all of us ate breakfast late and chilled in the hotel all day! It was pretty relaxing, but it was hard not to think about how we would be competing in a matter of hours.

So qualifiers went really well, I was nervous on my first climb, a slab problem, but I still managed to flash it. My second climb I fell one hold from the top on my first go, which was frustrating. But I got right back on and sent it second go.

The third climb was completely my style. I really like pinches on an overhang, and I'm fairly good with dynamic movement. And the third climb was exactly that, three pinches in a row with a one-handed jump from the third pinch to a handle. So I flashed that climb, and really enjoyed it, it was probably one of my favorite competition problems of all time.

The fourth climb I did OK on... I think I could've sent it, but I was trying some really weird beta that made it really hard. 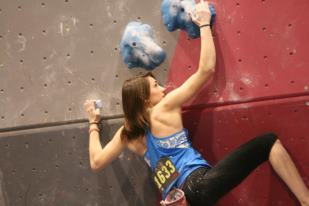 My first climb in semis was a really balancy and tricky slab climb. I gave it, I think, 5 tries, and sent it on the 5th go with about ten seconds left when I grabbed the finish.

The second had crazy sideways, around-the-corner dyno that I couldn't get, and ended up falling on my face every attempt! It was actually pretty painful... (the routesetters actually changed that route before the female juniors climbed it, i think to prevent the dangerous falls).

The third was super cool and had a (sort of) hand jam in the middle! It was on the section of the wall that's my favorite (the middle overhanging section) and I flashed it!

When I walked away after I finished my third climb, I wasn't totally happy with how I'd climbed. I was actually really worried that I hadn't made finals because I didn't stick the dyno on my second climb and the first climb took me so many tries. But, it turned out I was wrong, and was in fourth going into finals!

I felt like I hadn't climbed my best in semis, so though I was content in fourth place, I was hoping to step up my game in finals. 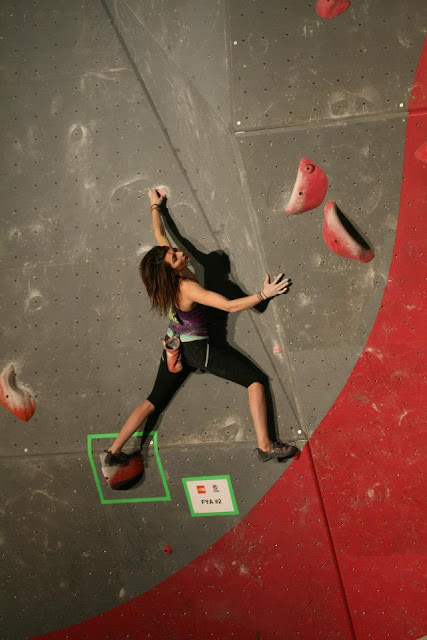 The dyno on my second climb! It looks so close... but it wasn't
Photo credit: Father
So finals was Sunday, the third day of competition. And everyone was definitely starting to lose some energy, but psych was still high. My category had a super strong field going into finals, and I knew it'd be super close. Going in in 4th place had me worried that if it came down to breaking a tie, I'd have a disadvantage.
When I went out and sat in front of my first climb, I had some crazy deja vu to last year's finals. The crowd was HUGE and so loud. I had to turn my iPod almost all the way up to block out the sound and get in my zone.
The climbs in finals were amazing, the first was really cool technical.
The second, was really fun and had a sweet toe hook on it. 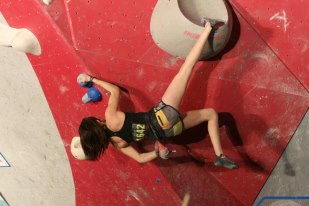 My second finals climb!
Photo credit: Father
And the third climb probably was my all-time favorite climb I've ever done indoors. It was on my favorite wall again, and had a turn-around and jump move.
Looking at the climb, the jump was the only move I was really worried about before I got on. I hadn't sequenced turning around before jumping, but as soon as I was standing on the climb and about to jump backwards, I realized turning around would be much easier. The rest of the climb wasn't too bad, but had some bad slopers on it.
I couldn't have been more excited after flashing all three finals climbs, but I knew some more (really strong) girls still had to go! But I ended up being the only Female A to have flashed all three, making me National Champion for the second year in a row! I never would have guessed that it'd happen again, but I owe a lot of my thanks to Kris Peters for motivating me to start training. 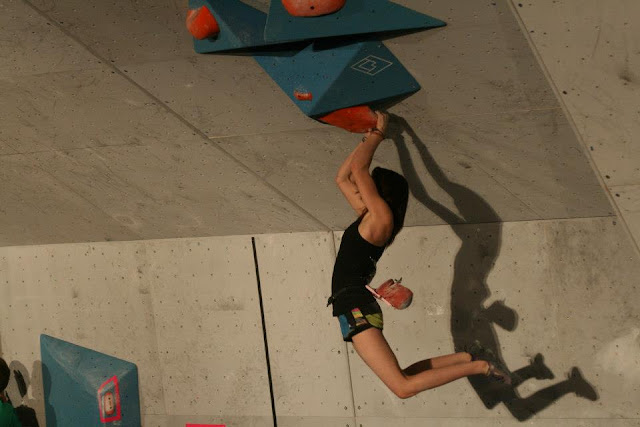 The jump on my third finals climb! 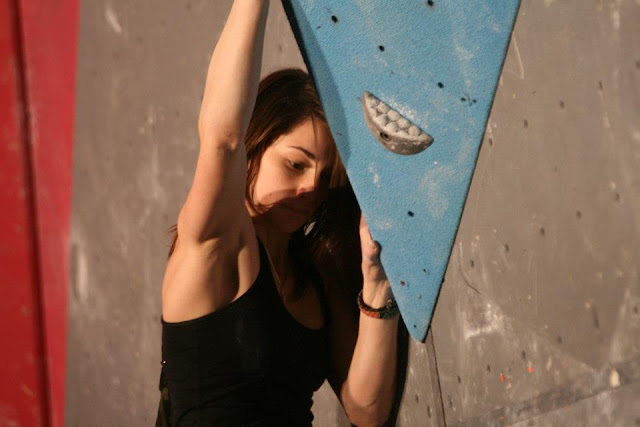 Tricky section on the first climb 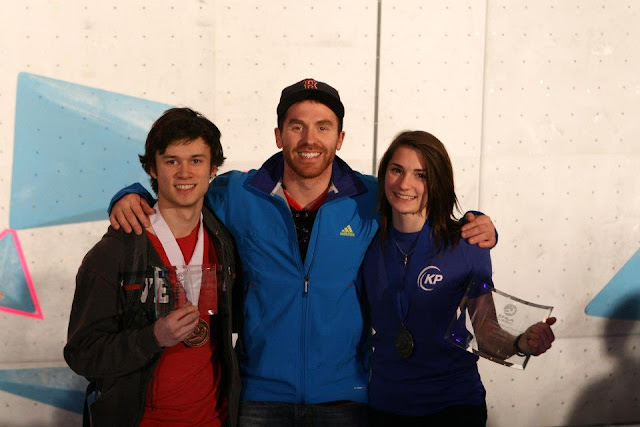 My training partner, Noah Ridge, my coach Kris Peters, and me!
After I had finished climbing though, I still wasn't over my nerves. Some of my best freinds were about to climb! Josh Levin, Noah Ridge, Michaela Kiersch, and a lot of others were all in the Junior category, who all climbed after me. But, it turns out I didn't need to be worried, because they all came out and crushed it. Josh with three tops took first, Noah got third, and Michaela got second with flashing all three climbs!
Overall the entire competition was a wonderful experience, and I can only hope next year's ABS nationals will live up to it!
﻿ 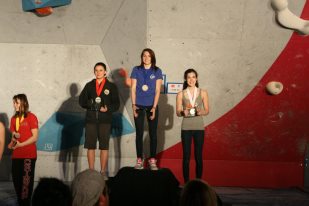 Female Youth A podium! Me, Megan Mascarenas, and Hannah Tolson! 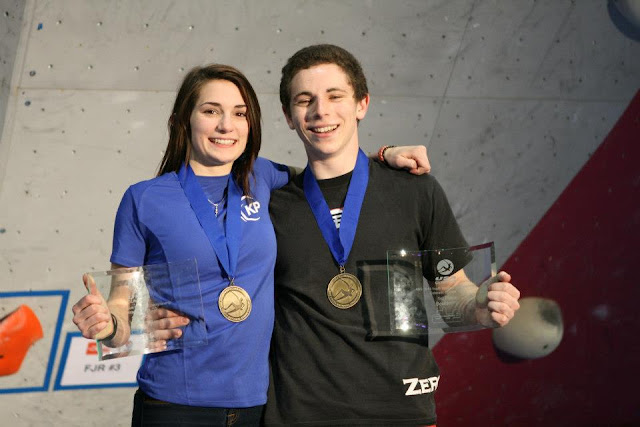 Female Youth A and Male Junior Champions! Me and Josh Levin
Posted by Kyra Condie at 5:42 PM No comments: